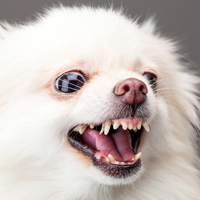 Veterinary Intervention for CCD
Many common symptoms and behaviors can mimic canine compulsive disorder. Your dog’s compulsive licking and biting, for instance, may simply be a response to irritation from a skin allergy, parasites or bacterial infection. Neurological or vision problems may also prompt odd responses. A proper veterinary exam can rule out physical causes for abnormal behaviors. If your dog exhibits genuine CCD, certain medications can prove helpful in reducing the symptoms. Contact your veterinarian if your dog exhibits any of the behaviors associated with CCD.

If your dog has developed a tendency to pursue the same pointless activity — sucking on his flanks,  chasing his own tail, barking or snapping at thin air, et cetera — he may be suffering from canine compulsive disorder, or CCD. Fortunately, treatment and training can help him overcome his obsession.

National veterinary organizations define compulsive behavior in animals as an activity that the animal pursues so single-mindedly that it has a significant negative impact on his quality of life. Canine compulsive disorder seems to bear at least some resemblance to obsessive-compulsive disorder in humans; in fact, a recent university study has found that both conditions are associated with similar brain structure anomalies. The condition may also be the result of abusive confinement and lack of socialization, physical abuse, extended separation from owners, constant aggression from other pets in the household, and other sources of prolonged anxiety or mental trauma.

Dogs with canine compulsive disorder may chase their own tails; lick, chew or suck obsessively on their skin or fur; snap at nonexistent creatures in the air (a phenomenon known as “fly snapping”); spin around and around for long periods of time; feel compelled to chase lights, shadows or other visual phenomena; become fixated to playing with a particular toy; or bark constantly, even when there is no obvious reason for alarm or excitement. It is important to note that while many of these behaviors may correspond in the short term to normal animal behavior, such as the love of a favorite toy or the desire to lick at an injury, constant and/or unfounded repetition of the behavior may indicate underlying CCD. Compulsive dogs, however, will perform these activities for hour after hour, often to the exclusion of everything else.

While veterinary evaluation is necessary to eliminate other possible issues, and thus to diagnose CCD, and then determine whether medication can help (see right-hand column), a combination of training and attentive owner care can help affected dogs break the cycle of compulsive behavior. Professional dog trainers can help you teach your dog obedience skills to control his behavior gently and humanely. Activities that stimulate and challenge your dog mentally and physically can also provide welcome opportunities to burn off excess energy while giving your pet something else to do besides obsess. Introducing your dog to new places, sporting activities, puzzle games, people and animals can all prove immensely helpful in steering him toward healthier and more productive behavioral patterns.