The Canine Genome and DNA Testing 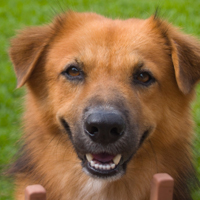 Have you ever looked at your adopted dog with its short legs, shaggy hair and brown spot encircling one eye, and wondered what dog breeds are in there?  Now that science has decoded the DNA of dogs, science can tell us many things.  Harvard and MIT programs unraveled the canine DNA sequence in 2006, which unleashed the potential for useful information.  Since then, many companies have begun doing genetic testing for dogs.

Two main types of information are gleaned from testing: identifying what breeds are in a mixed -breed dog and looking for the presence of genetic mutations causing disease.  Now that we know what genes are normally present and in what order, we can compare any dog’s genes to that normal.   We know the normal order of genes for most of the dog breeds.   Scientists have also found that many diseases have a genetic basis, and have found genetic markers for them.

Some people want to know what dog breeds are represented in their cross-bred dogs.  Most want to know just for the fun of it, but there is an advantage to knowing, in that you can predict some behaviors or diseases that are prevalent in certain breeds.  If your dog has any Border Collie or Australian Shepard in it, it will likely need a lot of exercise, and not be a good dog for living in an apartment.  If your dog has any Boxer in it, you would know to watch for heart disease, lymphoma, and tumors in general.  The reports identify which are the major breeds in your dog, and also find the breeds that are represented to a minor degree.

There are three main companies performing dog breed identification.   The Wisdom Panel can detect the most number of breeds, 157, and is done on a blood sample, so a visit to your veterinarian is needed.  More information can be found atwisdompanel.com.  The Canine Heritage Company can identify 105 breeds and uses a sample from a cheek swab.  More information can be found atcanineheritage.com.
The BioPet Company can identify 63 breeds and uses a cheek swab; the kit is sold at many pet and on-line stores.  Their web address is biopetvetlab.com.

More valuable to veterinarians is the fact that now we can test for some diseases using genetic tests.  The laboratory looks for genetic markers, that is, changes in the DNA sequence that have been shown to be associated with a certain disease.  An example is a genetic mutation in Dalmatians discovered by University of California at Davis researchers.  Most mammals metabolize the amino acid purine (found in meat) into allantoin, which is excreted into the urine.  But, people, great apes, and some Dalmatians produce uric acid instead of allantoin.  This concentration of uric acid in the urine causes Dalamtians commonly to form urate stones in their bladder, and surgery is needed to remove them.   The identification of the genetic mutation now enables breeders to correct the problem.

Another genetic condition we can test for is Von Willebrand’s Disease, a blood clotting disorder common in Doberman Pinschers.  These dogs do not clot their blood properly, and are at risk for severe hemorrhage even with a simple surgery.  Many veterinarians recommend that all Dobermans have this test before they are neutered or have a hysterectomy (spay) or any other surgery.  If they are shown to have this disease, they can receive a plasma transfusion to replace the missing clotting factor before their surgery.
The ability to test for genetic reasons for disease is a huge leap forward in medicine.  The future not only will show more diseases that have a genetic basis, but hopefully a method of changing or eliminating these mutations.