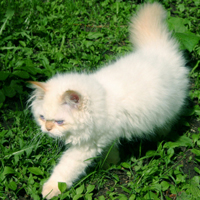 Poisonous Plants
Both indoor and outdoor plants can be toxic. This is a list of the more common plants that cause problems:
1. Lilies. Most lilies, not just Easter lilies, are toxic to cats. Any species of the Lilium family should not be used if cats are present.
2. Sago palms. All parts of this palm are poisonous, but the seeds are the most toxic. Ingestion of Cycas revoluta causes liver failure.
3. Oleander. All parts of Nerium oleander are toxic. Ingestion causes heart arrythmias, hypothermia, and even death.
4. Tulip and Narcissus bulbs. Ingestion can cause gastrointestinal symptoms, drooling, depression, loss of appetite, seizures, and heart abnormalities.
5. Amaryllis. This is a common spring flower that can cause vomiting, diarrhea, depression, tremors, and poor appetite if ingested.
6. Azaleas and Rhododendron. Ingestion can cause vomiting, diarrhea, weakness, depression, coma, and death.
7. Castor Bean. The highly toxic ricin, potentially used in bioterrorism, comes from the castor bean. Ingestion causes vomiting, diarrhea, weakness, tremors, seizures, coma , and death.
8. Cyclamen. The highest concentration of the poison is in the root of the plant. Symptoms are intense vomiting; death has been reported.
9. Pothos. This popular household plant can also cause oral irritation and gastrointestinal symptoms.
10. Yew. Ingestion of Taxus species causes tremors, incoordination, vomiting, diarrhea, heart failure, and difficulty breathing.
-English Ivy. Hedera helix, if ingested, can cause drooling, vomiting, and diarrhea.

Everyone looks forward to spring with its fresh air, colorful flowers, and sense of renewal.  But there are many hazards associated with this season.  We should always be on guard when it comes to our pets and potential dangers.
Many areas of the country have a problem with snails; people often put snail bait in their garden and flower beds.  The most common snail bait contains metaldehyde that is very toxic to pets.  Dogs will readily ingest it and will start to show symptoms in a few minutes to a few hours.  Tremors and twitches can progress to seizures.  One company manufactures Sluggo Slug and Snail Bait containing iron phosphate that is much safer for pets.

The Easter holiday can bring its own set of problems.  Easter lilies in an arrangement of cut flowers or outside in the garden are very dangerous for cats.  Ingesting even a small amount can cause kidney failure in cats.  Early signs may be lethargy, drinking excessive amounts of water, and then not drinking enough, and a poor appetite. Signs of worsening kidney disease are vomiting, diarrhea, and eventually anemia.

Other Easter dangers include the plastic fake grass placed in baskets.  Pets ingesting this can obstruct or the plastic grass can actually cut the intestine and cause peritonitis.  Cats are especially prone to eating these linear foreign bodies.  Symptoms are vomiting, lethargy, and not wanting to eat.  Other items in those Easter baskets, such as chocolate, plastic eggs or toys, can also cause illness if ingested.

Warm weather that comes with spring also brings parasites, especially fleas, ticks, and mosquitoes.  Fleas can carry tapeworms, cause allergies and skin problems, and in some areas of the country carry plague.  Ticks can carry several diseases that can be transmitted to pets and people:  Lyme disease, Rocky Mountain Spotted Fever, and Ehrlichia.   Mosquitoes transmit heartworms to dogs and cats.   All dogs and cats should be on a monthly heartworm preventative and monthly flea and tick control.

Some areas of the country have a problem with foxtails, a seedpod from a weed.  These seedpods have very sharp barbs that can penetrate skin or the foxtail can migrate up nostrils, into ears, eyes, or any orifice.  Once inside the body they can still migrate, even into the chest, abdomen, or brain.  Signs include sneezing, draining tracts in the skin, shaking the head and ears, or squinting of an eye.

Spring brings many people into their yards and gardens.   New landscaping materials can also be dangerous.  There is a popular new product, cocoa bean mulch, which is a byproduct of chocolate production.   It is attractive and has a great odor, unfortunately dogs also think it tastes great!  It contains theobromine, and its ingestion causes methylxanthine toxicosis.  Symptoms are vomiting, tremors, and increased heart rate, even seizures and death can occur.

When landscaping your yard, take into consideration if the plants can be toxic to pets.  There are numerous plants that are poisonous, with a variety of toxins and symptoms. Many just cause mild symptoms such as drooling or an episode of vomiting, but some plants are very dangerous, for example oleander and sago palms, and can easily cause death if ingested.  The ASPCA  Animal Poison Control Center  web site is a good source of information for all types of poisons and toxins.