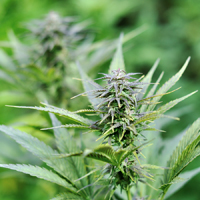 Marijuana Is Not a Treatment for Pets
Some people ask about intentionally giving their pet marijuana for arthritis or other pain relief. Dr. Lori Green, a critical care veterinarian at the San Francisco SPCA Veterinary Hospital, discourages using marijuana as a treatment.
Marijuana has much more adverse effects in pets than in people, and there is no research showing that marijuana helps relieve pain or has any other beneficial effect in pets. Dr. Green says there are more effective, safer, and approved drugs that veterinarians have in their pharmacies.
If your pet requires pain management, speak to your veterinarian about proven pain management options.

Imagine your concern if you came home to find your dog unable to walk, unresponsive, or in a coma.  This is becoming more common as marijuana begins to lose its illicit status, at least in some areas of the world. As the decriminalization and even legalization of marijuana has occurred, cases of toxicity in animals have unfortunately increased. Marijuana seems to have a much more profound effects in pets than in humans.

The Pet Poison Hotline has reported a 200% increase, over a five year period, in calls asking about marijuana and pets. California and Colorado both passed legislation to legalize medical marijuana usage. At the University of California, Davis, Veterinary Medicine Teaching Hospital there were four cases of marijuana toxicity in 2010, but there were 27 cases in 2013. Two Colorado veterinary hospitals reported a four-fold increase over the last six years, and this was before marijuana became legal. All but two of these cases lived; two dogs who ate cannabis butter died. In a 2002 study of 250 cases, 96% of cases occurred in dogs (dogs will eat anything!). In this group there were two fatal cases, one was a cat, and the other a horse.

The active ingredient in marijuana is THC, tetrahydrocannabinol. THC affects neurotransmitters, so when toxicity occurs, neurological signs are the most common symptoms. These symptoms include depression, lack of cooridination, dilated pupils, tremors, seizures, and coma. Other signs that can occur are vomiting, salivation, low blood pressure, slow heart rate (but sometimes a fast heart rate can happen).  Death is rare.

Pets are usually exposed by ingesting marijuana, or foods that contain extracts of marijuana.  Signs can develop within 30 to 90 minutes after exposure. THC stays in the body up to five days, but symptoms usually last up to 72 hours.

When a veterinarian is presented with a patient where marijuana toxicity is suspected, but the history cannot confirm (either because the owners are not aware, or don’t want to admit it), a urine test can be used to detect marijuana.

Dogs and cats with marijuana toxicity require hospitalization. Treatment may include inducing vomiting if the ingestion occurred very recently (within 30 to 60 minutes), the patient is awake, and it is safe to do so. Activated charcoal is also administered, often every eight hours for the first 24 hours as this helps to bind the THC so it is not absorbed into the body. Intravenous fluids are started to help flush out the toxin, and to help maintain blood pressure. The pet patient’s temperature, blood glucose, and blood pressure are closely monitored. Other symptoms, such as seizures or vomiting, are treated if they appear.

Many pets will eat anything, so vigilance is needed to keep them out of trouble. Marijuana poisonings are becoming more frequent, and can cause severe symptoms in pets. Pet owners need to be aware of what is accessible in a pet’s environment and keep their pets safe.