Get Down With Your Dog 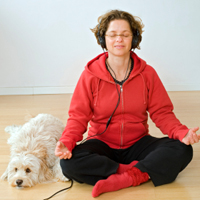 Did you know?
Most people who practice yoga refer to the poses and terms in Sanskrit. Sanskrit is known as a classical language once used in India. Here are some of the most common terms:
Doga: Yoga for dogs
Dogi: A dog who practices yoga.
Yoga: The union of mind and body.
Yogi: A human who practices yoga.
Tadasana: Mountain Pose
Adho Mukha Svanasana: Downward-Facing Dog

Each year fifteen million Americans engage in the practice of yoga. Many of the same Americans own some of the over seventy-three million dogs owned in the United States. If you put yoga and dogs together, you get doga (pronounced DOH-gah). Doga is sweeping the nation including large American cities and small towns. Doga provides a unique opportunity for humans to calm and focus themselves while working on improving their flexibility and while sharing the experience with man’s best friend.

So what really is doga? Simply explained doga is when humans and dogs work together in relaxing and calming poses originally thought to only be practiced by humans. If you watch the movements your dog makes on a daily basis, you will see how dogs are natural yogis.

After much study, human yogis (yogis are people who engage in the practice of yoga) started to notice their pets would always stretch and position themselves in certain ways before and after naps or during playtime with other dogs. Watching closely, people realized dogs were natural yogis, always stretching themselves before engaging in new activities.

The nice part about doga is that anyone can participate. Most dogs just love the interaction with their human. When attending a class in a studio, dogs take the chance and opportunity to visit each and every mat and meet new dogs and their owners.

To share the experience of yoga with your dog, all you need is a yoga mat and a dog! Start by leaving your yoga mat out in the open where your dog can investigate the mat, smell it, feel it, and even lay on it. After your dog feels comfortable on the mat, go ahead and join them. Your canine companion might not understand at first what it is you are doing but soon you will both find a way to incorporate each other into the poses.

In the all famous “Downward Facing Dog Pose” many dogs will simply lay on the mat under their owners, looking up for an occasional kiss on the face. Other poses such as the triangle pose, where the human is standing in a wide stance with one arm reaching up and the second arm is used to for balance, so now is a great opportunity to use the trusty canine companion as a prop to balance themselves while gently rubbing their pet.

Whether an experienced yogi, or just a beginner, go ahead and give doga a chance! There is no right or wrong way to do doga as long as you and your dog are relaxed and calm while enjoying some good stretching!