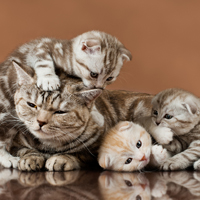 Cats are Obligate Carnivores
Cats have different nutrition requirements than dogs. Cats require some amino acids that are found only in meat. Dogs can be vegetarians, but not cats. Cats fed a dog food can become blind as a result of the nutritional deficiency, or can develop a severe heart disease called cardiomyopathy. Discuss your cat’s nutrition with your veterinarian.

Cats are amazing animals.  They have become one of the most popular pets because of their playfulness, independent nature, daily low-maintenance lifestyle, and affectionate personalities. Enjoy these fun facts about your favorite feline.

Just as a person has a dominant hand, a cat usually uses one front paw more than the other. This has been associated with gender in both people and felines. Most female cats are right pawed, and most males are left pawed. The percentages are different for people, but the trend is the same. Only about 10% of humans are left-handed, but most of them are male.

The eyes of a cat can detect the smallest movements, even in very low light.  Cats can see images in as little as one-fifth the amount of light that people and most animals need for seeing.

The cat ‘s weakest sense is taste. People have about 10,000 taste buds on their tongue, but cats have less than 500.

Cats have very acute hearing, with the ability to hear the ultrasonic sounds made by small rodents (at 60 to 65 kilohertz), and they are  able to determine the direction of the sound by using the 20 muscles in each ear to pinpoint the location.

A cat’s fur is sensitive to air movement, with the whiskers being the most perceptive to the cat’s environment.  A blind cat will move its head side to side in order to use the whiskers as a blind person uses a cane.

The first known cat to be given a name, Bouhaki, appears in Egyptian drawings as early as 1950 B.C.

Cats were held in high esteem in Egypt and were treated with enormous respect. In ancient Egypt, cat owners shaved their eyebrows as a sign of mourning when one of their cats died. The crime of killing a cat was punishable by death.

In the 5th century B.C., as Persian soldiers attacked an Egyptian city, the soldiers carried live cats. The Egyptians chose to surrender rather than risk the lives of the beloved felines.
The Egyptian Mau, a short -haired spotted cat, is one of the oldest cat breeds. The word “Mau” was the ancient Egyptian word for cat, and also meant “to see” or ” to foretell”.

Cats are one of the most popular pets, as evidenced by the many YouTube videos!  If you do not have a cat, maybe it’s time to consider adopting one from a local shelter!