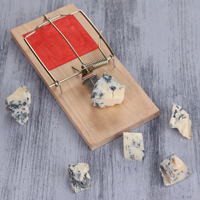 Protecting Your Pets
Since recent bans on anticoagulant rodenticides, other forms of rodent bait are becoming more popular. These types of baits contain neurologic type poisons. The most common neurologic poison is Bromethalin. Bromethalin ingestion causes severe brain swelling, seizures and death in all mammals. All mammals from rodents, cats, dogs, and small children are at very high risk for death if ingestion occurs.
Treatment is only successful if the pet is known to ingest this type of poison and is treated appropriately within 1-2 hours. The only treatment known to be successful is induction of vomiting to reduce the amount of poison in the body below toxic levels. After 1-2 hours the likelihood of successful treatment reduces with every passing moment.
As with every chemical or poison used in the home, be aware of risks to animals and humans. Speak to your veterinarian to learn tips for reducing risks in your home.

There are several general classifications of rodent poison (rodenticide) available over the counter.  The most common is one that prevents blood clotting called an anticoagulant; D- con being the most easily recognized in light of the recent bans on second generation anticoagulant rodenticides.

Anticoagulant rodenticides can come in many forms from liquid, to pellets, to blocks. They are made to be palatable, thus the increase in risk to pets. When they are ingested the active ingredient is absorbed and begins blocking Vitamin K. Vitamin K is not a vitamin in the traditional sense, instead it is a molecule used by the blood during the clotting process.

Unfortunately, signs of sickness begin days after ingestion. Usually signs start with weakness, tiredness and then progress to coughing.  Nearly 100% of cases of anticoagulant poisonings start with bleeding into the lungs.

Treatment of these anticoagulant poisonings often lags behind the initial poisoning resulting in dramatically reduced survival rates.  This is often because pets do not act sick after ingesting the poison and therefore owners either are unaware it happened or believe the pet will be fine.

Treatment of these poisonings depends on how soon the pet is brought in for treatment as well as the severity of that pet’s illness. The prognosis and survival rate is dependent on early recognition of signs and treatment.

If an owner is aware that their pet ate the poison, vomiting can be induced to remove as much of the poison as possible and the pet can be started on a Vitamin K supplement until all the poison leaves the body.  This reduces the risk of bleeding and the pet has an excellent prognosis with appropriate monitoring.

If a pet is already suspected to be suffering from the signs of poisoning and is bleeding into its lungs or other tissues the treatment is very different. Diagnosis is usually through a blood test that determines how long it takes for the pet’s blood to clot – these times are longer in poisoned pets.  Xrays can show how severe the bleeding is into the lungs as well, providing more information for prognosis.  The pet is started on Vitamin K and will often need a plasma or whole blood transfusion.  The transfusion is important not only to replenish blood volume but also provides the pet with the blood clotting factors the poison is blocking.

As with most poisons, owner awareness is critical to saving the life of the pet. Knowing what poisons are on the property and ensuring that pets do not have access is the first step in prevention of poisonings.  Then, making sure to check those poisons regularly so if it is ingested, early treatment can be started.