A Great Tool for Pet Owners 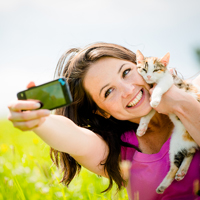 Apps for Smart Phones
Of the 1.3 million apps available, at least a few are related to pets!
One is the Whistle Activity Monitor which is a device that attaches to a dog’s collar, and has an app to monitor the dog’s daily activity. It also can chart food and medications, and can be shared with dog sitters.
The HomeAgain Pet Rescuers App streams real time alerts into the app, and an interactive map displays all the lost pets in the area. There are also tips for helping lost pets.
Want to get a great photo of your dog? Use the Bow Cam IPhone app. It gets your dog’s attention by emitting barking sounds, so you can get that perfect picture.

Modern veterinary medicine has seen many technological advances:  digital x-ray, color Doppler ultrasound, CT scans, and MRI. There is, however, another great tool that has helped veterinarians and that most people have at their fingertips – their smart phone!

The photo and video capability of phones has helped communication between pet owners and their pets’ doctors. Often, it is hard to describe an unusual behavior, or to determine which leg the dog is limping on, or to tell the difference between a cat’s cough or retch. A picture is worth a thousand words!  The veterinarian is really helped by being able to see a photo or watch video of the pet.

There are several common scenarios where these images are helpful:

Seizures are common in dogs and are seen occasionally in cats. Grand mal seizures are pretty obvious, but partial seizures can look just like unusual behavior. They also have to be differentiated from syncope (which is a fainting spell) but dogs in a syncopal episode act differently than when a person faints.  Dogs in a fainting spell will often move their legs and vocalize. Thus it is very helpful to the veterinarian to see video of these episodes to decide whether it is a neurological event (seizure) or is related to their heart (fainting).

Limping and coughing are symptoms that dogs exhibit at home and often do not show during the exam at the veterinary hospital. The excitement of going to the hospital causes an adrenaline release which often makes the signs disappear for a short period of time. Video of these episodes when the pet is at home can help with the proper diagnosis.

Photos of any suspicious material is helpful to the veterinarian when trying to develop a diagnosis. For instance, bloody vomit usually looks like coffee grounds; photos of the vomitus can identify underlying causes. Photos of feces, sputum, or any other abnormal material should be shown to the doctor during the exam.

Smart phones have provided a great leap forward in communication between pet owners and their veterinarians. Photos and videos can be shown to the doctor during the office visit, or can be emailed to the animal hospital. The more information the doctor has, the faster an accurate diagnosis can be made.